Can you still find this day, my dear, among your possessions?

Among the souvenirs of your trips to faraway lands, the textbooks from those halcyon days when you walked the hallowed portals of that engineering college, the cassettes whose covers were left behind after one of those bacchanalian sessions in the hostel, the photographs of those classmates whose names you can't remember? Or is it hidden in the darkness, put out of sight along with the book you bought but never read, the gift you never quite found a use for and the letters you never finished or sent.

I can still find it here, in the city, in the house which you have never visited, in the kitchen where I have imaginary conversations with you. It is here even when I am not, for I go out now, leaving the light on and the music playing, so I can return home to the illusion of company.

It is not that I always feel like this, sometimes I yearn for those days when tears and laughter both came easy. Those easy and quick transitions from ecstasy to despair. When a compliment could keep my mind occupied for hours on end and a harsh word could prick like a pin the same skin which now seems dry and insensitive. Like probably millions around the world, I look outside the window of a crowded bus, lost in my own thoughts and wonder how it could happen to me.

Was I not supposed to be different from the rest? Not for the silly schoolgirl infatuation with the football team captain or the fascination with the good for nothing, pot-smoking aspiring poet. Ours was a mature friendship that had blossomed into more. How could I feel a pang of envy then, when you lent a helping hand to another girl, when you spoke about someone who's far away and about to be married, when you were so involved in the book you were reading that you did not notice that we never met all day?

When we decided that it had been too long and that we should meet, I carefully started preparing a package for you. A small poem, that book you always wanted but never found, an old photograph and a bar of chocolate for us to share. What would I wear and what would we talk about? The package still remains in my drawer waiting for the phone to ring again.

It was a rainy Sunday afternoon when we sat in my tiny hostel room, discussing capitalism and campus gossip with equal fervor. When it seemed as if those conversations could last forever and we would never tire of them. When Joni Mitchell sang "California" seven times on continuous play before we thought of getting out. 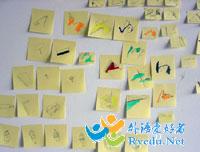 Then one day suddenly we were looking for each other. You were always somewhere else, doing something else and strangely enough so was I. Those new people I met on that trip and that junior guy who loved the same movies I do. That girl next door who took math lessons from you. My room was almost always locked and yours was no different. We seemed to have discovered a whole world outside of ourselves all of a sudden. The tragedy was we had also lost the world we had before.

Then came the rescue mission. The loud fights in the hostel wing, the long silences and the desperate angry notes. Frustration, anxiety and even love revealing itself in the ugliest possible ways. Then indifference, complacency and resignation. Calm, dispassionate discussions on how we could stay friends. The decision that we should always let the other know when we would be around. That's when I started leaving those yellow post-its on the door. Those yellow post-its which by the time I came back would have your coordinates that I never used. If we had all of them now, they would be telling this tale a lot better than I am now.

Back home, I still continue leaving those post-its to this day, hoping that someone will write their whereabouts on them as well.